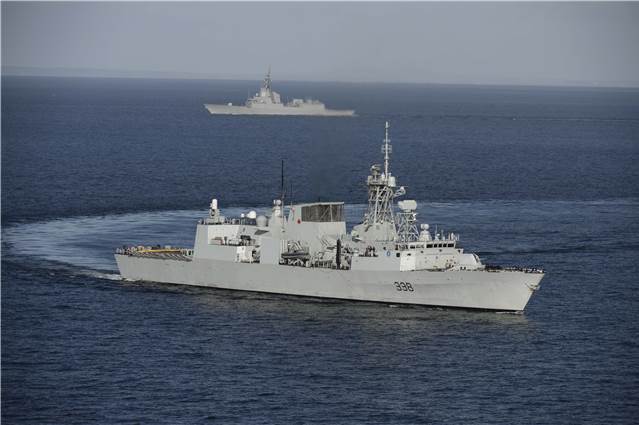 During the exercise, the task group’s mission was to assist a fictitious nation with the enforcement of a mock United Nations Security Council Resolution. The resolution called for protection of the population from the threat of terrorism, protecting critical infrastructure, reassuring the local and international community, and ensuring freedom of maritime navigation.

“Exercise JOINT WARRIOR 152 was a great opportunity for HMCS Winnipeg to train with all of our warfare capabilities while demonstrating the value that this high-readiness team brings to international operations,” said Commander Pascal Belhumeur, Commanding Officer of HMCS Winnipeg.

During Ex JW152, all of HMCS Winnipeg’s capabilities were put to the test. The ship’s Above Water Warfare team protected the population and infrastructure by defending against aerial and surface threats from military forces while the Underwater Warfare team scanned the waters of the exercise area searching for submarines and other subsurface threats.

The scenario also saw the ship’s CH-124 Sea King Helicopter fly reconnaissance missions to identify various threats and provide aerial protection to both the ship and its allies. It also included mine countermeasure units working to clear the waterways of explosive hazards.

Further, HMCS Winnipeg’s Enhanced Naval Boarding Party boarded several suspicious vessels in the region to investigate their business and ensure that they were not contributing to terrorist activity.

Finally, the remainder of the crew on HMCS Winnipeg supported the exercise’s other tasks by maintaining the ship’s propulsion and combat systems, responding to damage control situations, providing casualty support and ensuring the well-being of the team.

“The team responded in Exercise JOINT WARRIOR 152 just like they would any real-world scenario,” said Lieutenant-Commander Kevin Whiteside, Executive Officer of HMCS Winnipeg. “We came together and responded like the high-readiness unit that we have trained to be and as a result, we further built upon our interoperability with our NATO counterparts.”

While deployed, HMCS Winnipeg is participating in a number of joint NATO training exercises, including Exercise NORTHERN COAST, Exercise JOINT WARRIOR 152, and Exercise TRIDENT JUNCTURE.
Posted by DMaillet at November 08, 2015