Rafale Should be Next Fighter for RCAF

I would like to first give credit to Doug Allan of bestfighter4canada for his assessment here for the Dassault Rafale compared to the JSF F-35.

Many people claim that Canada should remain in the F-35 program despite the promise by Justin Trudeau to withdraw from the program. They say that the F-35 is a far better aircraft that any out there. Well that is just not the case. In a direct comparison to the Dassault Rafale, which better meets Canada's needs for a fighter jet - the Rafale clearly has an edge - despite it's lack of stealth.

Not only is the Rafale cheaper than the JSF F-35; it is faster; flies higher; has a larger operational radius than the F-35; and it has dual engines. Just a few reasons why the Rafale should be the RCAF's next fighter.

Oh, and a bonus - Dassault says it will allow the majority of the order to be built in Canada.

Now onto the comparison. 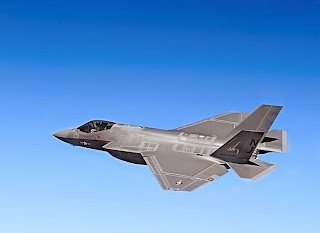 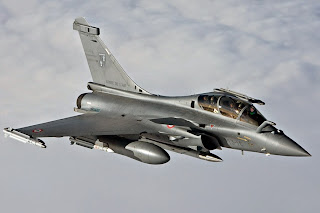 
Interdiction/Penetration: The Rafale's SPECTRA suite has gained notoriety for being one of the best EW suites available. Given that benchmarks for these sort of things are classified, and not available to a part-time blogger like myself, I cannot say just how good it is. There is a good chance it is the next best thing to a purpose built stealth aircraft.

The F-35 is a purpose built stealth aircraft, however. There may be some debate over whether it offers sufficient protection against current and future threats, but the truth is that the JSF is currently the stealthiest aircraft available. This may change in the future, but right now the F-35 is the best choice for sneaking past enemy ground radar. Advantage: F-35

Deep strike: Well... This one is easy. Both aircraft have a similar combat radius and ferry range using internal fuel only. So it simply comes down to which one can carry more external fuel.

The Rafale can carry massive amounts of fuel in external drop tanks. It can also be utilized for "buddy" refueling. If that was not enough, every Rafale has the plumbing to mount CFTs, which have been tested but not implemented.

As of now, the F-35 has no external fuel tanks. Some concepts exist, but problems with separation have pushed external tank capability back indefinitely. The JSF will carry the AGM-158 JASSM-ER, but that missile's extra range cannot make up the difference from having no external fuel options. Advantage: Rafale

Payload: The Rafale makes for an impressive bomber, able to carry over 20,000lbs of ordinance on 14 hardpoints. While its not a bomber per se, it certainly comes close.

The F-35 has only 10 hardpoints and carries one ton less than the Rafale. The JSF also has the limitation of its internal weapon bays. While those bays are necessary for stealth, their size limits the type of weapon that can be mounted inside. Anything longer, wider, or heavier than a 2,000lb JDAM will have to step outside.

This one goes to the French. The Rafale offers nearly the same ground-pounding capabilities as the much larger (and more expensive) F-15E Strike Eagle. Advantage: Rafale

Close air support: The F-35 is destined to replace the A-10 its iconic role. Not many are buying that. It is simply too fragile an aircraft and it burns through its fuel too fast to spend any time on station. To its credit, its EOTS acts as a built-in targeting pod and it will be outfitted with MBDA Brimstone missiles. This means it will likely be able to take out a few targets as it zips buy. 25mm cannons will be built into the A model, and available in external pods in the B and C model.

While it currently lacks a low collateral damage weapon like the Brimstone, the Rafale still gets by okay. Its airframe is more durable than the JSF, has twin-engine redundancy, and it does quite well flying low and slow, thanks to its carrier-friendly design. While it has a 30mm cannon like the A-10, it is not the same weapon and it carries far less ammo (125 rounds).

If the Rafale had Brimstone missile (or similar) capability it would get an easy win here. Even still, its ability to loiter more with external tanks give it a slight advantage. A Rafale pilot is also far more likely to fly closer to the battlefield, confident that a stray bullet will not bring the fighter down. Advantage: Rafale

Air-to-ground winner: Rafale. While the F-35 may do a fine job at slipping through enemy defenses, the Rafale does a better job at just about everything else when it comes to ground attack. It flies further, can carry more bombs, and its more likely to mix it up with the troops.

First look, first kill: The JSF is being marketed with a massive emphasis on its ability "see" everything around it without being detected itself. With an advanced AESA radar, EOTS, and DAS (which replicates IRST) the F-35 certainly will be able to get a good look at what is around it.

While the Rafale lacks the F-35's stealth, but it has a similarly sized AESA radar and a IRST. Part of its SPECTRA suite puts IR sensors high up on both sides of the tail, giving a similar "god's eye view".

The Rafale is certainly good in this department, but the F-35 is just as good if not better, plus it has its stealthy design. Advantage: F-35

Beyond Visual Range: The F-35 pilot better hope it gets a successful sneak attack in, because after that first shot, all bets are off. The Rafale is not just faster in a straight line dash, but it climbs faster and cruises faster as well. On top of that, it will carry the ramjet powered Meteor BVR missiles, which look to be superior to the F-35's AMRAAMs.

Unfortunately for the F-35, it may not even get the chance for that sneak attack. It would likely have to enter into the Rafale's passive sensor range before it gets a clear shot. Its stealth may keep it safer from radar, but not much can be done to shield its big, hot engine.

Within Visual Range: By now most have realized my disappointment with the Rafale's current lack of HMD. One has been tested, but it has yet to go operational with one. HMD's really do help a fighter's WVR capability when combined with HOBS missiles. Despite all this, the Rafale is still a very good WVR fighter, with impressive maneuverability, thrust-to-weight, and the ability to fire HOBS missiles with the help of data links and LOAL (lock on after launch capability).
While the F-35 has excellent HOBS potential thanks to its various sensors, it misses the mark somewhat with its disappointing wing loading and thrust to weight numbers. This alone is not enough to delegate it to second-rate WVR status. What does is the fact the F-35 cannot carry an internally mounted WVR weapon. Plans to carry the ASRAAM internally have been shelved. Any F-35 in "stealth" configuration will have to rely strictly on 2 to 4 AMRAAMs.

This is really an "either/or" scenario. If the Rafale had an HMD, it wins. If the F-35 is carrying external WVR missiles, it wins. If we give a "best case scenario" for both aircraft (HMD for the Rafale and WVR missiles for the F-35), then the Rafale wins based on its superior maneuverability and thrust-to-weight ratio. Advantage: Rafale

Dogfight: Thanks to its close-coupled canard design, the Rafale is just as happy playing it low and slow as it is supercruising. It has plenty of thrust and a big gun. No problems here.

The F-35... Notsomuch. While the F-35 said to match the low speed performance of the F/A-18, there are still concerns about its fragility and its lack of cockpit visibility.

If the JSF pilot finds themselves in a dogfight... They are going to have a bad time. Advantage: Rafale

Air-to-air winner: Rafale. The supercruising, Meteor slinging, tighter turning Rafale gets a clear win here. The F-35 will need to rely on guile and sneak attacks, a tall order given the Rafale's excellent sensors and defensive capabilities.

Versatility: Hoo boy... Both of these fighters were designed as "all-in-one" systems capable of fulfilling all of your fighter needs... With a few caveats.

The Joint Strike Fighter has three versions, the CTOL capable F-35A, the STOVL F-35B, and the CATOBAR F-35C. Sadly, no two-seater versions are available.

So which one is more versatile? If you need a STOVL, then the F-35 is the way to go. Otherwise, a two-seater version may be preferable for both training and high workload tasks. I'm going to give this one to the Rafale since STOVL operations are ratherlimited in real-world usefulness. Advantage: Rafale

Logistics: Long term support is where these two aircraft differ the most. The Rafale is completely single sourced. It is currently in use by a single nation with maybe a second coming soon. Parts and maintenance could be an issue, but Dassault is willing to grant complete access to the Rafale's software and intellectual property. Customer nations have the option of producing any and all spare parts and modifying the software as they see fit.

The F-35 is the polar opposite of this. Parts should be plentiful with JSF squadrons located all over the world. The Pentagon and Lockheed Martin are keeping close tabs on F-35's hardware and software, however. Any modifications to the JSF's hardware or software has to be done through them. This is like taking your laptop back to where you bought it in order to add an external hard drive or to install a new app. Something as simple (yet necessary) as a drag chute might have to wait until Lockheed Martin gets around to it.

Both aircraft have their advantages and disadvantages here. Advantage: Tie

Versatility/Logistics winner: Rafale. It is close, but the availability of a two-seat Rafale gives it a slight edge here. 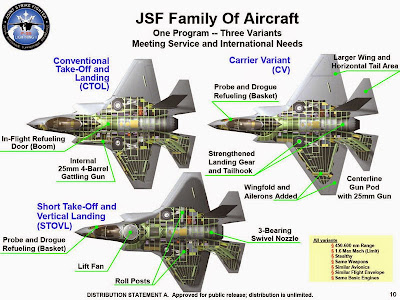 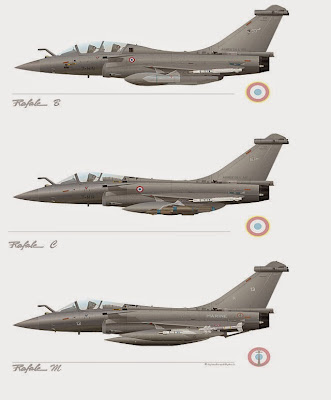 
Ouch. The F-35 certainly is stealthier than the Rafale, but that is about the only real advantage it has. The makes for a better bomber or air-superiority fighter. The JSF is also hindered by its proprietary maintenance model and its lack of two-seater variant. Sure, it has a STOVL version, but few have need (or the budget) for that capability. Canada was not even considering the STOVL version of the F-35.

The real kicker for the Rafale is how much potential it has. A few simple upgrades and modifications would really put it at the head of the pack. A more "open source" model, with user selected weapons, engines, and avionics would really make it a dream machine for just about any air force in the world.
Posted by DMaillet at November 09, 2015