The Canadian navy is on its way to Haida Gwaii to find out if a diver has discovered "the lost nuke" — a Mark IV bomb that went missing after an American bomber crashed off B.C.'s north coast in the early days of the Cold War.

"I got a little far from my boat and I found something that I'd never ever seen before," he recalled. "It resembled, like, a bagel cut in half, and then around the bagel these bolts molded into it."

When he got back to the ship he tried to describe the object to his crew.

"I came out from the dive and I came up and I started telling my crew 'my god, I found a UFO. I found the strangest thing I'd ever seen!'"

Smyrichinsky started asking around and was told the story of Convair B-36B, a US Air Force bomber that crashed off B.C.'s north coast in 1950.

In a book published earlier this year, historian Dirk Septer traces the story of that flight, summarizing it in publicity documents as a Cold War drama:

"Just before midnight on February 13, 1950, three engines of a US Air Force B-36 intercontinental bomber caught fire over Canada's northwest coast. The crew jumped, and the plane ditched somewhere in the Pacific Ocean. Almost four years later, the wreck of the bomber was found accidentally in a remote location in the coastal mountains of British Columbia, three hours' flying time in the opposite direction of where it was supposed to have crashed.

"After years of silence, the United States finally admitted to losing its very first nuclear bomb; the incident was its first Broken Arrow, the code name for accidents involving nuclear weapons. But was the bomb dropped and exploded over the Inside Passage, or was it blown up at the aircraft's resting place in the mountains?"

The lost bomb was a Mark IV. 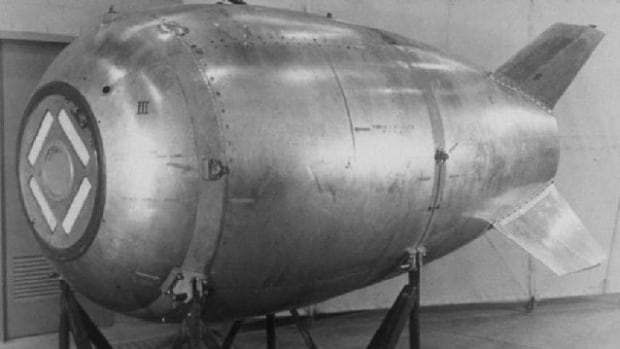 As soon as Smyrichinsky looked it up on Google Images, he recognized it as the object he had found.

"It was a piece that looked very much like what I saw," he said. "The plane that was carrying the bomb, it crashed 50 miles south of where I found that object."

"What else could it possibly be? I was thinking UFO, but probably not a UFO, right?"
Accordingt to the Navy, the Bomb is probably not nuclear.

Major Steve Netta of the Canadian Armed Forces confirmed the location of Snyrichinsky's find does coincide with the site of the 1950 crash.

Netta also said records indicate the lost bomb was a dummy capsule and so there is little risk of the object being a nuclear weapon.

A Canadian navy ship has been deployed to investigate and should arrive in Haida Gwaii shortly.
Posted by DMaillet at November 04, 2016